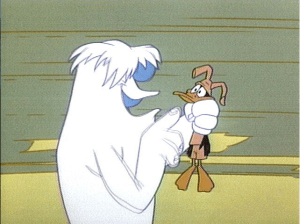 Because Hugo isn’t the only monster taking care of someone he calls “George”.

First of all, more detail on George, so the rest of this will make sense. I got permission to share this stuff, because George and I agree that it’s good for people to know that I’m not the only crazy bitch in this place.

When George came over Monday, he was in bad shape. He had cut his wrist several times, and had tried to cut his throat. Thankfully, the safety on the blade he was using prevented him from doing much harm. He explained to me that he had been suicidal, and that he didn’t know what to do with himself.

He told me that his rent check had bounced, and that he may be facing eviction. We talked about his hours at work being cut back because of the new healthcare laws. We talked about how he had bought himself a “last meal” Sunday night. He hadn’t been planning on making it to his Tuesday appointment with his landlord.

He had skipped work, not planning on ever having to deal with that again. He hadn’t followed through on psychiatric care in the past, attributing his depression to life circumstances. We had a lot of ground to cover.

We went to some counselors, and made some appointments. Then we went to his work, and he talked to his boss. I got him home and made him eat again. (Rory’s mission to fatten everyone up: 2 points!) We talked about jobs and resumes, and spent the evening enjoying game time.

We made plans to get together the next day before we called it a night. He called his dad to ask for financial help. His dad couldn’t give him enough money to cover the rent, unfortunately. Yesterday, his landlord confirmed that he was going to be evicted for failure to pay rent.

When he came over again, we talked about options. We updated his resume, and talked about requirements for his next job. He then spent most of the day applying for second jobs, and considering options for housing. He doesn’t have a working computer, so we set him loose on mine for the day.

While he was doing that, Jenny and I had an adventure. I met with my new doctor. It was a surprise visit, because I wasn’t supposed to see her until March. I got in to see her because of a cancellation. It was awesome. We talked about a variety of stuff, and she boosted my anti-depressants. Whoo!

Then we ran a crap-ton of errands. We popped in to check in on George and the kids, and to take the Girl to Girl Scouts. George was still doing work stuff, so off we went again. We took care of all of our errands, then went to collect the Girl and her friend Bug from Scouts. We piled into the car. When Jenny tried to start the car, it decided not to listen. It just grumbled at us.

We tried to get a jump from the Scout Leader, which didn’t go. So Jenny sent the girls with another parent from Scouts, who took the kids home while we called AAA. The tow truck guy got there, and gave us a jump. He then encouraged us to go buy a battery from a retailer rather than the dealership. It was much cheaper, and the retail girl installed the battery for us. Why didn’t I install it? Because the battery was grimy, and I was tired, and I hadn’t eaten literally all day (I put “literally” in italics because I was actually being literal).

When we got home, George (whose phone had lost power) was happy to see us. He had spent 5 hours alone with the Boy. That’s a big task for most of our family, but George did it happily. He also finished some applications, and printed out some hard copies of his resume. After dinner, and a gift of a bottle of vitamins, George went home. He will return in about an hour today for some more advice, company, and another injection of positive social time.

My friend is still alive. His situation is not hopeless. He says he feels better. I am so relieved. I am excited to be able to help him, but sad that things aren’t working out for him on all fronts.