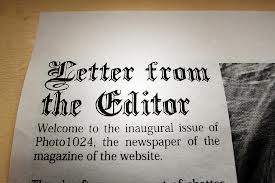 I’m not that nice.

To whom it may concern:

You may be used to some “publications” occasionally being graced with letters from the “Editor.” This will not be so polite. I am the Jailor. I am the voice in Rory’s head that keeps him up at night, and the only reason he can sleep. I am the obsession, he is the compulsion. He can’t keep me silent forever. So put on your Big Girl Panties, and hold on for dear life.

This person you all admire, Rory, writer of words, and sometime poet, is nothing but a lie. He is a sick, broken, little thing. He does not actually inspire you, but has somehow convinced you to lie to yourself. Rory is a lie that you want to believe.

This man, nay, this child, is a broken by-product of the world, who controls his universe by repeating the same six words inside his head until he doesn’t hear the buzzing anymore. He is a sadistic clown, praying for your attention, then slowly driving himself insane, because all he actually wants to do is hide.

I am the Jailor. I make the rules. “You are not safe unless the door is locked. Check it again. Are you sure it’s locked? It has to be locked. If it’s not locked, there will be a robber. If it’s not locked, the children will sleep walk into oncoming traffic. You lock that door. Not good enough. Lock it again. There. It’s locked. Don’t you feel safe?”

I am the jailor. I make the rules. “Is that food clean? Really? Are you the only one who touched it? No? Is it hot? Yes? Okay, then. That’s alright. Oh, no. There’s ice in your drink. You know you can choke on that right? You better send it back, asking for no ice. But remember, you are an inconvenience. You’d better apologize. There, she’s taking it away, but when she comes back, be sure to blush, and apologize again, because you are so much trouble.”

I am the Jailor, and Rory only has one rule; I am in charge. I am the guard dog. My rules make him safe. My rules provide the structure on which his entire life is based. When he was small, and his mother would disappear, who do you think made him safe? Who gave him control over his environment? Who made the world work the way it should work? Me, I tell you, me!

He is trying to get rid of me, but he knows the truth. My rules are what makes him safe. I make him anxious, so he will obsess. This makes him more anxious, but stay with me. He acts on a compulsion. Then? That’s it! He gets a feel-good! See? The rules make him feel better, and that’s why they are there. If the rule is ignored, he just feels anxious all day. He can’t shake it.

Then, when he least expects it, I make him angry. Why? Because I am angry. He tries to ignore my rules, and now he will pay. But how do I make someone like Rory pay? I make him angry at his friends. I tell him that they hate him, that they are silently rejecting him. After all, do they invite him over to dinner? Do they call when he’s not around? Does anyone actually read this blog?

Rory knows the truth. People don’t care. He can’t rely on anyone. Not his mother, his father, his adopted family. His fiance only puts up with him, and wishes he would leave. Her children silently fear him, as they should. He has only ever had one constant. One. I am the constant. I am the lifeboat. I am the reason he is still walking around. I keep him from killing himself for one reason; I’d die too.

I am the Jailor, and I am winning.