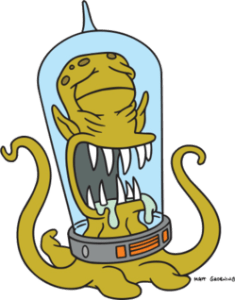 KANG! From the Simpsons show.

When I was a teenager, I started hallucinating. Mostly just distracting shit, like spots and stuff. You know how, if you look at the light just right, you can see shit floating around in the air? Like dust and stuff? It was like that. Except colorful. Like unicorn vomit, or something.

I would see spots, and thought there was something wrong with my blood pressure, because high blood pressure can make you see spots. That hypothesis was wrong. Then I started seeing weird shit. Like acid-crazy shit. Frogs and halos, and weird colors and stuff. I got used to it, no biggie. This went on for like 5-6 years.

One day, I was sitting in my Comp 1 course, and my teachers head grew tentacles. Not in an awesome Cthulhu kinda way, though. It was all orange, and they were coming out at weird angles. It made him look like the aliens from the Simpsons. I took my happy ass to the emergency room. I had CAT scans, and MRIs. I got poked, prodded, and scanned again. In the end, the doc told me to stop drinking so much caffeine, and sent me home.

A month or two later, I ended up back at the emergency room (3 months without so much as a Coke). They told me I was schizophrenic, which I knew wasn’t right, because my mom has schizophrenia, and I know how crazy that shit really is. I told that doctor to fuck himself, which probably made him think “yep, definitely schizophrenic.”

A few months later, my father killed himself. Visiting with our family was a real wake-up call for me. After I got home, I made an appointment with a free Christian Community Clinic. I went in, sat down, and explained everything. I told him about my mom’s mental illness, and my dad’s suicide. I told him about my impulsive marriage, and my tendency to leave my entire life behind periodically. We talked for a long time.

When we were done, he explained to me what Bipolar Disorder was, and how it affects people. It was like he was describing me. I cried. He suggested therapy, and started me on a low dose of medication. It was enough to make me realize a few things.

Over the next few months, I had several moments of clarity. I went back to work. I stopped talking non-stop. If you know me in person, you are laughing in your sleeve right now, because you think I still talk non-stop. Nope. I used to talk so much that people would just start talking over me, and around me. They would ignore me, just so they would get a chance to talk. I barely talk at all now, compared to the way I was before.

Bigger changes happened. I realized that my ex-husband was significantly mentally ill. Despite being committed several times, he didn’t believe he was crazy. Once I was medicated though, I saw it every where. Whenever I would bring it up, he would remind me that I was the one who put the cat in the freezer. Bastard.

Quick tangent – I was having a flashback at the time, and I knew I needed to put the cat somewhere safe. I panicked, and put it in the freezer. My ex-husband rescued it promptly.

Back to the story!

I told him that it didn’t matter if I put the cat in the freezer. It didn’t make him less crazy. The argument was Legen-wait-for-it-dary! I ended up telling him not to touch me, because I didn’t trust myself, which he said basically added up to me threatening him, which is totally fucking backwards, because I was trying to protect him!

Long story short – I divorced him, and moved to Arizona, once again leaving everything I owned behind.

I’m medicated, and kinda sane (sometimes). He’s been diagnosed, and is seeking treatment.

It still blows my mind that $10,000.00 worth of emergency room visits didn’t catch what one single sit-down with a doctor working for free saw in a few minutes. I still remember his name, and it was some crazy Czechoslovakian thing. I can even spell it still! I won’t publish it here, though, cause he’s awesome.

Fuck. I just realized I was supposed to be lying to you. I promised that yesterday, didn’t I? Oh well, I assume this is crazy enough for you to wave at your relatives, so they get a good show on Thanksgiving. HAPPY FUCKING DEAD INDIAN DAY!