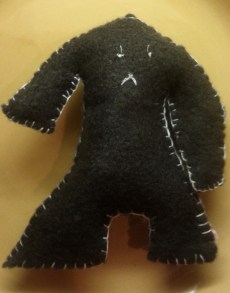 Ever since I started taking anti-depressants, I have had a wider emotional range. Mostly, this has meant being sad when people say hurtful things, or getting my feelings hurt when I make an effort and it flops. Some days though, these emotions make me a giant dick.

Yesterday, I started the C25K app program. It’s a running program that helps you get off the couch, and get into running. It was a pretty decent way to start the day. Except, my day didn’t start that way. It started with me having a hard time getting out of bed, because of Minecraft. Then we had to drive the kids across town to be with their dad. (This is not our routine. We normally take them to Phoenix for the weekend on Fridays.)

On the drive over, Jenny asked me if I was doing okay. I said “yes” and dropped the conversation. Meanwhile, my mind was super analyzing every thought, expression, and action I experienced that morning (You know, all 15 minutes of it.) I realized that I was angry. Not pissed, just generally angry. I don’t know why.

I know it wasn’t getting up early. I knew that was going to happen before I went to bed. I know it wasn’t the kids, or Jenny. I was just angry. So, when we got home, we promptly started the C25K program. Our first day was great, and I felt great while doing it. I stopped being angry, too. For exactly 30 minutes.

I struggled all day to enjoy things in the moment, and to not dwell, stew, or ruminate too much. As long as I had a solid distraction, I was pretty okay. When it got to be too much, I tried to nap. I was promptly woken up by my twin brother who told me about a family member’s home burning down, and how my grandmother is giving up on life, and how he wants to help.

I thought his charitable mood was great, especially since the “help” he was suggesting would take a lot of time, effort, and (a decent amount of) money. I was humbled by his attitude, but again reminded that life sucks sometimes.

I haven’t been able to shake my mood since. I’m hoping some time with friends we don’t see often will help. Have a good day, all!