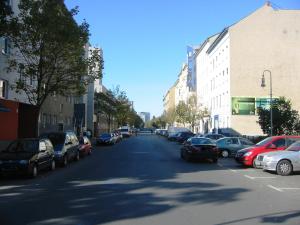 It’s “die Straße.” Because streets are girls. Image from commons.wikimedia.org

Jenny and I started learning German. It’s kind of awesome, but kind of terrifying. I mean, my personal Hell is “not knowing.” It’s the worst thing in the world, and I’m diving into an entire language that I don’t know! I mean, what if I never learn how to properly conjugate the verb “to litigate”? I could be stuck in a situation where I had to describe something legal-ese and I would be completely crippled from embarrassment!

It makes me kind of hate Jenny too… but in a good way. She keeps telling me that she’s afraid I’ll get ahead of her, because I keep listening to German music, and German podcasts. But in reality, she is cranking it out on ancillary apps, and she really gets it. The bitch.

The really crazy bit is how much we laugh. We both make the same mistakes most of the time, and we catch each other doing it. It’s nice, because we both feel like we are doing it together. It’s setting an interesting precedent for us to spend an hour a day together, just learning things together. I love watching her roll her eyes when I make a syntax mistake. (I often say things in the wrong order.) And I love the smile that creeps onto her lips when she realizes she left out a word, or used too many.

It makes me nuts! But the program we are using is a blast. It really makes you learn your stuff before you move on, and it always builds on the stuff you already know. I’m having a blast, and I’m glad I get to do it with Jenny. She’s quickly becoming my life.

I love it. I just don’t love that she knows the difference between “know” and “no” and “boy and “girl.” It ain’t right. Also, I don’t understand how a street can be feminine, and a city square be masculine. It doesn’t make any sense!

Now, if you will excuse me, I’m going to do this app in bed for the next 8 hours, instead of sleep. I’m going to get ahead of her when she’s not looking. Of course, in the morning, she’ll yell at me for not getting any sleep. And then she won’t let me take a nap, even though I’ll be a complete dick all day. I mean, I’ll be completely out of it, I can’t be responsible for that, now can I?