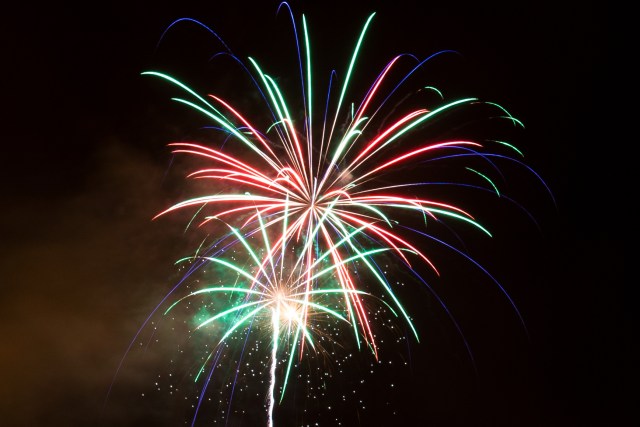 Fourteen years ago, I formed my most vivid holiday memory to date. July 4, 2001 is a day I will not be forgetting.

Dirk, the true genius of DIY plumbing, made our family an arsenal of firework-powered weapons. Most notably, he made a series of steel pipe “guns” which shot bottle rockets. As you can imagine, my thirteen-year-old self thought many things about this. “Cool, guns!” and “Is my aim good enough to hit Dirk between the legs?” were the two that stand out most.

What didn’t occur to me (and cut me some slack, I was a kid), was that bottle rockets could catch things on fire. The list of flammable materials happens to include baggy tie-dye t-shirts. I was a BIG fan of baggy shirts back then. You see where I’m going with this?

After about 5 horrible, hilarious, terrifying, and thrilling minutes, I dodged a bottle rocket aimed straight at me. Except, I was a fat, slow, uncoordinated teenager. My “dodge” ended up being a “catch the bottle rocket in my right armpit.”

The initial explosion was kinda sucky. Loud, sudden, and hot, the BANG felt like I’d been punched. Right in the armpit. By a very hot fist. It took me a whole 3 seconds to realize that my underarm was hosting a exothermic party. When I realized I was on fire, I froze. I remember every damned millisecond of the following event.

There was a tickling sensation on the back of my arm. It felt like a warm hand was lightly resting on my shoulder. I thought about this, and couldn’t think of a single rational explanation. Then I looked over my shoulder. The smell got to me before my eyes got the picture. Smoke.

Not the crisp smoke of a wood stove, or the oily smoke of barbecue meat. No, this was an acidic, acrid, and all around chemical smell. My eyes saw a waver of smoke before my nose gave me the emergency update that my body hadn’t figured out yet: There was a fire in my shirt, no innuendo involved.

I tried to pull the shirt off, but it was, you know, around arms and a neck and stuff. Very inconvenient. I basically tore it off. The fire had cut away at the side, so it split pretty easily. Thank God for old cotton. The thin material was easy to tear, and there was no plastic to stick to my newly raw skin.

I inspected my shoulder, found a few burning threads hanging off of my elbow, and let the adrenaline take over for a minute. My animal-brain kept shouting “STOP, DROP, and ROLL, MOTHERFUCKER!” Meanwhile, my human-brain was shouting “IF YOU HIT THE GROUND, YOU WILL GET AN INFECTION, IDIOT!”

Obviously, I was of two minds on the subject.

As a tie-breaker, I ran into the house. I was crying uncontrollably now. Adrenaline has this side effect people don’t talk about much. It destroys your remaining energy. Adrenaline might get you out of the fire, but it might not get you out of the woods. I found my mom, showed her my shoulder, and asked for help. This part was all blubbery, as I recall, and I was an adult before I learned that adults actually CAN understand the gibberish their terrified children are spewing. Well, sometimes.

My mom tore off a chunk of Aloe Vera (that was a plant that paid for itself hundreds of times over, I tell you what), and rubbed soothing, healing, gooey plant blood all over my shoulder. The burn was minor, but it covered about four inches of my back, and about half of my armpit. I couldn’t hold my arm right for about four days. Thank God I wasn’t in school, writing would have sucked.

I spent the rest of the day inside. I went outside to see the fireworks (but only the ones that were pointedly aimed at the sky), and I went inside when I got uncomfortable. I remember an elevated sense of anxiety, and general discomfort from my shoulder. I was okay.

And then the nightmares came. Not long after, the flashbacks came, too.